Andrew Miedecke (AKA Mad Andy) blasted into touring cars after a fast and spectacular career in open-wheel racing, leading Bathurst in a low-budget Ford Sierra before being snapped up as Peter Brock’s teammate.

He often qualified well, had some great results and a couple of wicked crashes! He even won a NASCAR title before he left serious motorsport to concentrate on business. But he couldn’t stay away for too long, returning in his sixties to face-off against Jim Richards and John Bowe in the Touring Car Masters Series while backing his son, George, in V8 Utes then stock car racing in the USA.

Throughout Miedecke’s career he always lived by one modus operandi, “give it absolutely everything, every time. I reckon that’s how you’ve got to be.”

Miedecke was born in Tasmania and got the motor racing bug early, even landing a job in the timing box at Longford when he was only 15. 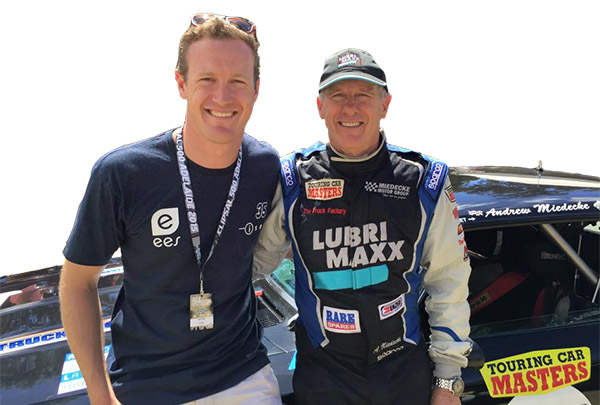 Starting out in a Ford, he was second in the Driver to Europe Series and that gave him a springboard into more than a decade of open-wheel racing, mostly in Formula Two and Formula Pacific cars. He was a regular overseas racer too, competing in Britain, Macau, Malaysia, and New Zealand against a wide range of rivals including Bowe. But it was a Kiwi, Steve Millen, who gave Miedecke his “Mad Andy” tag while he was racing in March in Formula Pacific.

The “Mad Andy” tag stuck thanks to some spectacular open-wheel crashes! He turned his car into a canoe in a giant crash in Macau in 1980 and, in 1984, went through a trackside billboard at the New Zealand Grand Pix at Pukekehoe.

“I was driving one of Graeme Watson’s cars. I lined up on the second or third row for the second heat, dropped the clutch and got a good start. As I got into the braking area I accelerated. The car went upside-down and I took the “R” out of “Castrol” in a giant billboard!

“It turned out a rock had jammed the throttles. “In Harry Galloway’s car I had a crash in practice for the New Zealand Grand Prix and broke both my legs. One was broken in 20 places.” Touring cars might have looked safer, but Miedecke was really looking for a way to turn professional.

“I had been in single-seaters a long time, but I could see there wasn’t going to be any money – ever. If I was going to be able to drive professionally, apart from going up to Asia, it had to be in touring cars. In late 1986, or it might have been early 1987, I went to New Zealand and rented a Ford Sierra. A few of the Kiwi boys had them. They were early Roush cars; they had the 2.3 Pinto engine.”

On the plane back to Australia, Bo Seton – father of Glenn – came up to Miedecke and suggested a way to go racing in a Sierra.

“He doesn’t talk much but he said, “ A mate of mine, Don Smith, has got these Cosworth Sierras and is getting duded, and told me to give him a call.” It didn’t take Miedecke long to forge a partnership, using some of the money he had made with a new car dealership in Port Macquarie.

“So that was the ’87 touring car championship. The deal I struck with Don was that I bought a Sierra from him for $125,000 and he paid all the expenses to run it, with OXO sponsorship. We were pretty competitive. That first year I remember we were the dominant Ford Sierra team.

But Bathurst was a boomer. He qualified on the front row and led easily, although he always knew Smith – more than five seconds slower in practice – would not be able to sustain a serious run.

“I think that first OXO Sierra was the best touring car I drove. It really was good that day in ’87 at Bathurst. I think I was driving as well as I ever had. I was sitting on the grid thinking, “I’m really looking forward to this”, and it’s not every day you can say that.

When Smith decided to sell up, Miedecke had a new team and some surprising names in the line-up.

“Ross Stone came over to work for me from New Zealand. And Jim too. I used to race against Ross, when he drove in a self-built Formula Pacific car called the Cuda – that was a scaled down McLaren M23, because Jim had worked at McLaren.” There was backing from Yokohama and Kewood, as well as a second car, and his best race result was a third. But the series only brought him eighth.

Miedecke crashed again at the Australian Grand Prix meeting in Adelaide – “I got punted by a competitor who should be nameless, but it was Dick” – and could not compete a planned race in Japan.

By the end of the year, Miedecke was wondering what to do when he was approached by Brock’s team manager, Alan Gow, at Advantage Racing to race a second Mobil Sierra in 1990.

“I knew the Brock team revolved around Peter, but I did a deal with them. I was going to get paid and take the pressure off myself. I went to Brocks and the first two or three races were fine. Peter and I were on the same pace. Then Alan came to me and said, “I’m off to England to run the BTCC.”” Then Brock got a break at Symmons Plains and Miedecke was left behind.

“I remember the boys went to the airport to pick up a new ECU [engine control unit] and Brock was on pole and disappeared. I never did get that ECU.”For much of the year Brock also had better tyres from Bridgestone.“Finally at Mallala I got some tyres, not the good ECU or the boost, and we were back relatively on the pace.”But a tangle with Bowe in the race, as he ran interference for Johnson, saw Miedecke flip his Sierra.

“There was a touch-up on the pit straight and my car ended up riding over John’s wheel and rolled over. [Team manager] Neil Lowe came up and apologised afterwards. It was the culmination of a tough year.” When Brock decided to return to Holden, it meant a new deal with Larry Perkins and Miedecke – as a Ford dealer – was left behind.

So things wound down and Miedecke concentrated on his car dealership. But he had plenty of great memories and a competitive fire that took him back to Touring Car Masters and tarmac rallying.

“I enjoyed everything I’ve driven. Single-seaters were always the love, especially the last Ralt RT4. It was the best car I ever had. We always gave it a good shot. Looking back, to do everything I was trying to do at the time, it was never going to work. But I gave it a shot anyway. I’m not at all dissatisfied with what I’ve achieved. I don’t think it was too bad an effort.”